Overlooking the Pukenui Forest in rural Northland, this family home in concrete and steel sits anchored to a ridge.

Traversing subdivided paddocks and an idyllic forest setting synonymous with rural New Zealand, this is a special place. For those who live here, the unique landscape holds a particular significance.

Toby and Amy Chapman-Smith would come to this land, sit on the ridge, and watch kererū swoop among the trees. Years later, married with two young sons, the couple decided to buy the site and design and build their first home.

From below, this home in Maunu, Whangarei, is reminiscent of corrugated iron rural barns; yet with some gumption and a foot firmly on the accelerator, the true magic of this home on a ridge comes to light. From a distance, it is conceived as a simple black shed-like form, emulating traditional New Zealand farm buildings. Turn onto the rugged, unsealed driveway, though, and the building’s true form is revealed: here the steel and concrete gabled structure appears anchored on the ridge.

The site runs east to west, the axis drawn by a 30-metre in-situ concrete wall that runs the length of the house, creating a bunker-like sense of solidity on the edge of nature. To the south, the edge of suburban Whangarei is extending, now blending with a patchwork of sheep pastures; to the north, a vast landscape of native forest stretches out towards a hazy view of Whangarei Heads.

“We really wanted to invest in the wilderness aspect of our site, and turn our backs on the development,” says Toby.

There’s refuge, but not from the elements; only from the semi-suburban estates behind. There’s a sense of grunt and practicality to this house, a raw, almost industrial aesthetic in its materiality, perfectly fitting in what feels like an untouched landscape to the north.

Toby was inspired by the 2016 Home of the Year winner, K Valley House by Herbst Architects, with its hardy corrugated iron exterior and an interior defined by its natural materiality and earthy simplicity.

After studying architecture, Toby went on to do a building apprenticeship. As a registered builder he was sure he could construct the house but when it came to the design, he called on his friend and architectural designer Ben Connor.

“We worked together to flesh out what the house was going to look and feel like; it was a real collaboration,” says Toby.

Toby’s brother, Sam Chapman-Smith, pitched in as the structural engineer, and together the trio developed the plans. Full of youthful ambition, but constrained by budget, the team worked tirelessly to create something truly special.
Entrance is on the upper level, which houses two of the home’s four bedrooms. Timber stairs, adjacent to the in-situ concrete wall, lead down into a double-height living area where views out to the forest are slowly revealed.

A vast sense of space is created here with the use of exposed, rough-sawn timber beams, white paint, and glass sliding doors that run the length of the living space, and open the area to a 90sqm deck that floats above the northern boundary.

“We wanted a simple form with details that complemented the wild rural landscape — a functional family home,” Toby explains.

The couple also had strong ideas about the materials from early on.

“We wanted a low-maintenance exterior and a softer interior with warm natural elements.”

Having an exposed structure was important to the aesthetic they were trying to achieve, and they did extensive research on trusses, LVL beams, and portal frames before landing on hardwood. Rough sawn greenheart was specified because of the natural finish and warmth, and its strength meant they could span from the ground floor to the rafters.

“We saw the opportunity architecturally for using that structural element to create depth and a sense of aperture on the northern elevation. It also offsets the horizontality of the building by dividing it up with these strong vertical elements,” says Toby.

“We wanted the beams to pop and needed a lining that would celebrate them. On a foggy morning, the white walls seem to disappear, as if we’re sitting in the forest with a fresh cup of coffee. There’s a sense of being within nature, rather than apart from it.”

Soft leather sofas are placed around a woodburner, while a low hanging chair, swinging in the breeze when the doors are open, gently obscures the view.

A polished concrete floor on this level adds another textural element, juxtaposing the rougher finish of the in-situ concrete wall. The kitchen is located at the western end of the open-plan living area, defined by timber cabinetry. Behind, two further bedrooms draw dappled light in from the north to a central hallway leading to a back porch. Upstairs, in the canopy of the home, skylights ensure the main bedroom and nursery are bathed in light.

As a rural family home, this is a place of strength. It is a unique approach to a conventional gabled structure expertly utilising common materials to striking effect. From the exterior, the building’s form articulates beautifully how thoughtful architecture can enhance a rural landscape and connection with it.

Having completed this project, Toby and Ben will continue to make their mark on the built environment, with the launch of their firm 4C Architecture Studio.

When asked if they would do anything differently, Toby is quick to say: “Yeah I’d probably choose an easier site!”

As for the house itself, it’s exactly what they wanted.  “We wouldn’t change a thing. We’re still pinching ourselves; it’s very special.”

A strikingly clear and simple form that rises past the many constraints due to site and remoteness. A deceptively simple interior that responds cleverly to its location and makes the most of a well-thought-out orientation. Black Ridge is a testament to both the design and the build efforts of a young team. Simple, well detailed, clear planning and forms, delivering a lot of house on a budget. A woodburner of nostalgia and efficiency: heating the 2022 Rural Home of the Year Green Home of the Year 2022: The Black House by Stacey Farrell Multi-Unit Home of the Year 2022: One Central by Architectus Alt + Reno Home of the Year 2022: Faith and Doubt by Crosson Architects 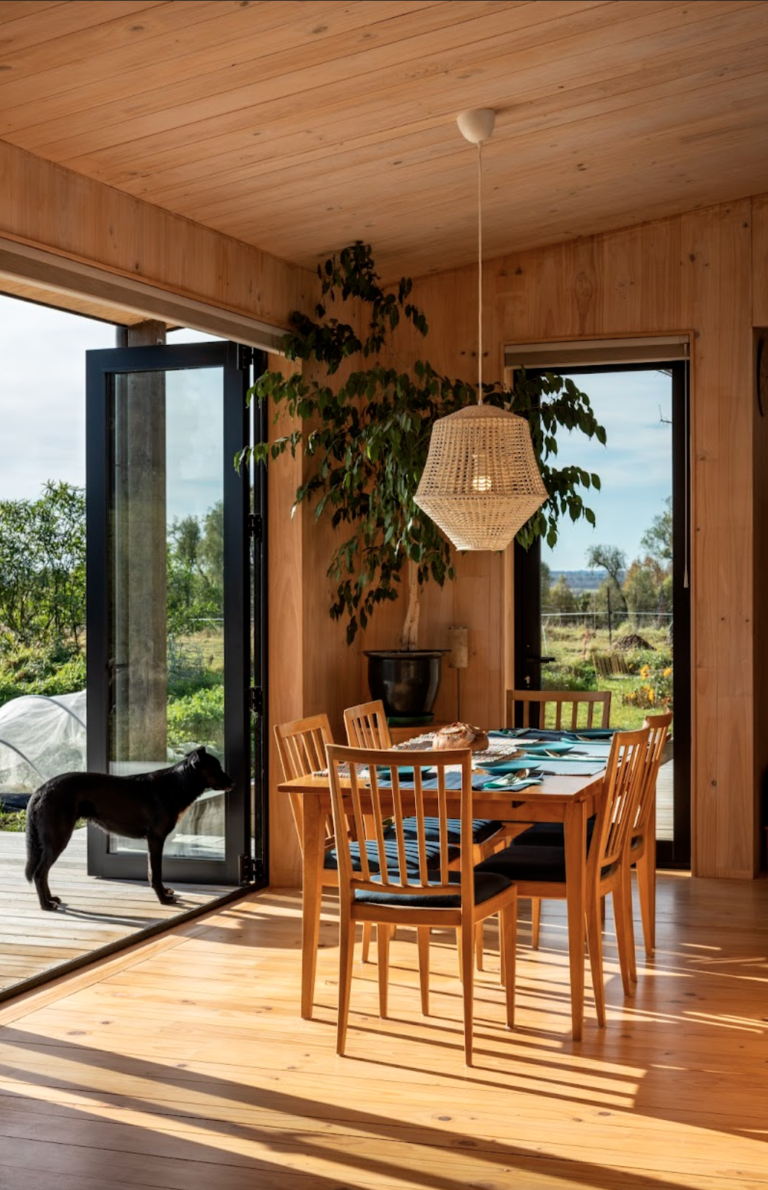